Commissioned by The Mercian Regiment.

The Mercian Regiment was formed in 2007, with its men soldiering through the heat of Helmand Province. Operations in Afghanistan would go on to dominate the first 10 years of the Mercian Regiment. This painting commemorates the actions of soldiers and officers from all four Battalions of the Regiment during Operation HERRICK.

‘We fought through the trees, rivers, ditches and fields of the Green Zone. We fought through the Dashte desert. We protected Afghans up and down the Upper Gereshk Valley. Medals were paid for in blood. Our actions became the stories which will echo through our Regimental history, as those we served alongside became legend. We stood firm with our brothers and struck hard against the Enemy.’ 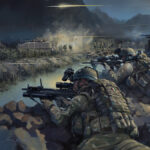 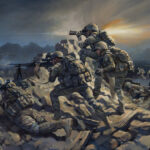 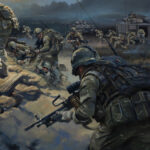