The Royal Anglian Regiment, ‘The Vikings’, deployed on its fourth operational tour of Afghanistan.

Commissioned by The Royal Anglian regiment.

Operating across the agricultural heartland of Nad-e-Ali District, the Battlegroup’s area of responsibility was divided, both physically and conceptually, by the Nah-e-Bugra Canal, depicted in the painting. Outside of the Canal Zone, in the desert settlements, the insurgent was disrupted by a series of strike operations resulting in regular hard fought engagements. The insurgent was consequently forced onto the back foot and the focus of his activity kept away from the protected communities, thus wresting the space required for transition.  Within the Canal Zone, security was maintained and investment made in developing the Battlegroup’s Afghan National Security Force partners, so much so that by the conclusion of the tour, nine out of ten police precincts had been transferred to an Afghan lead.

This marked progress and rapid pace of transition during the summer fighting season was, prior to Operation Herrick 16, not thought possible and was only achieved through the collective efforts and professionalism of the 1600 men and women of the Vikings Battlegroup. 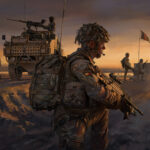 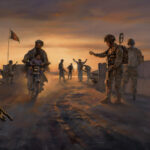