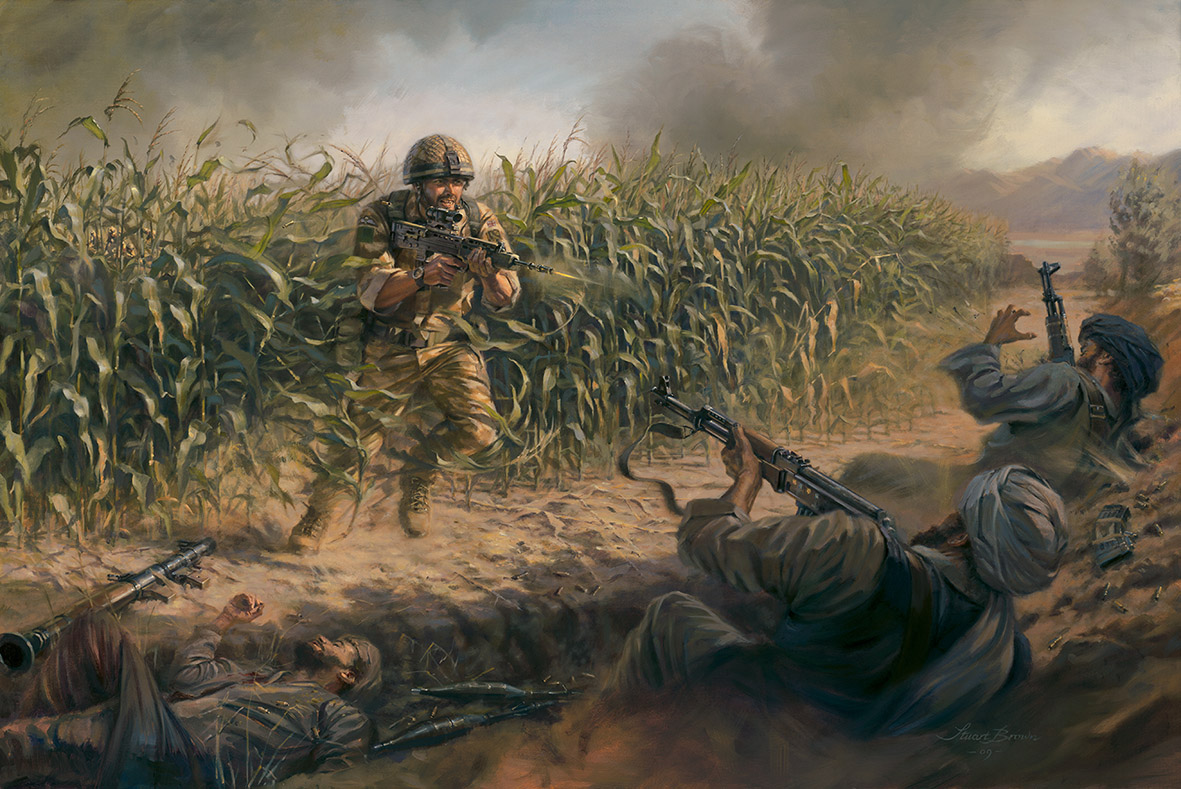 Cpl Bryan Budd of 3rd Battalion The Parachute Regiment assaults a Taliban position near Sangin, Afghanistan on 20th August 2006 to allow the recovery of wounded men. For this selfless act, and in recognition of his inspirational leadership and supreme valour, Cpl Budd was posthumously awarded the Victoria Cross.

Commissioned by 3rd Battalion The Parachute Regiment, the painting is reproduced as a limited edition of 650 artist signed prints (500 of these prints donated to 3 Para in aid of the Afghanistan Trust). Each print is supplied with a Certificate of Authenticity listing the full citation of Cpl Budd’s action:

‘During July and August 2006, A Company, 3rd Battalion, the Parachute Regiment were deployed in the District Centre at Sangin. They were constantly under sustained attack from a combination of Taliban small arms, rocket-propelled grenades, mortar and rocket fire.

On 27 July, whilst on a routine patrol, Corporal Bryan Budd’s section identified and engaged two enemy gunmen on the roof of a building in the centre of Sangin. During the ensuing fierce fire-fight, two of Corporal Budd’s section were hit. One was seriously injured and collapsed in the open ground, where he remained exposed to enemy fire, with rounds striking the ground around him. Corporal Budd realised that he needed to regain the initiative and that the enemy needed to be driven back so that the casualty could be evacuated.

Under fire, he personally led the attack on the building where the enemy fire was heaviest, forcing the remaining fighters to flee across an open field where they were successfully engaged. This courageous and prompt action proved decisive in breaking the enemy and was undertaken at great personal risk. Corporal Budd’s decisive leadership and conspicuous gallantry allowed his wounded colleague to be evacuated to safety where he subsequently received life-saving treatment.

A month later, on 20th August, Corporal Budd was leading his section on the right forward flank of a platoon clearance patrol near Sangin District Centre. Another section was advancing with a Land Rover fitted with a .50 calibre heavy machine gun on the patrol’s left flank. Pushing through thick vegetation, Corporal Budd identified a number of enemy fighters 30 metres ahead. Undetected, and in an attempt to surprise and destroy the enemy, Corporal Budd, initiated a flanking manoeuvre. However, the enemy spotted the Land Rover on the left flank and the element of surprise was lost for the whole platoon.

In order to regain the initiative, Corporal Budd decided to assault the enemy and ordered his men to follow him. As they moved forward the section came under a withering fire that incapacitated three of his men. The continued enemy fire and these losses forced the section to take cover. But, Corporal Budd continued the assault on his own, knowing full well the likely consequences of doing so without the close support of his remaining men. He was wounded but continued to move forward, attacking and killing the enemy as he rushed their position.

Inspired by Corporal Budd’s example, the rest of the platoon reorganised and pushed forward their attack, eliminating more of the enemy and eventually forcing their withdrawal. Corporal Budd subsequently died of his wounds, and when his body was later recovered it was found surrounded by three dead Taliban.

Corporal Budd’s conspicuous gallantry during these two engagements saved the lives of many of his colleagues. He acted in the full knowledge that the rest of his men had either been struck down or had been forced to go to ground. His determination to press home a singlehanded assault against a superior enemy force despite his wounds stands out as a premeditated act of inspirational leadership and supreme valour. In recognition of this, Corporal Budd is awarded the Victoria Cross.’ 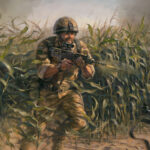